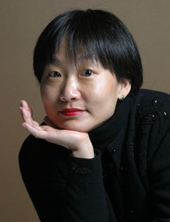 Amy Cheng was born in Taiwan, raised in Brazil, and the U.S.A. She received a BFA from the University of Texas at Austin, and an MFA from Hunter College, City University of New York. She has completed a number of public art commissions including a mosaic column at the Seattle-Tacoma International Airport, a painted ceramic mural at the Howard St. El Station in Chicago, IL, a faceted glass windscreens at the Cleveland Street Subway Station in Brooklyn, New York.

She is currently working on a set of four laminated glass windows for the 25th Avenue Subway Station in Brooklyn, NY, a mural for Metro-St. Louis located at the Lambert-St. Louis International Airport Metro Station, and a cut-tile mural for the Philadelphia International Airport. She has exhibited her paintings both nationally and internationally. In 2008 she received a Senior Lecture/Research Fulbright fellowship to Brazil. She has been awarded two New York Foundation for the Arts Painting Fellowships, and an Arts International travel grant to China. She is a Professor in the Art Department at the State University of New York at New Paltz.